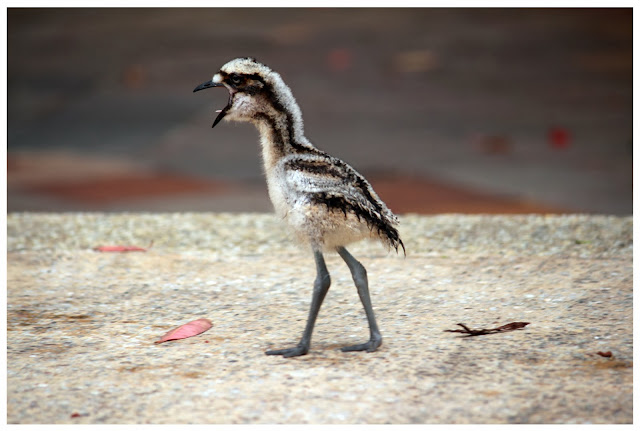 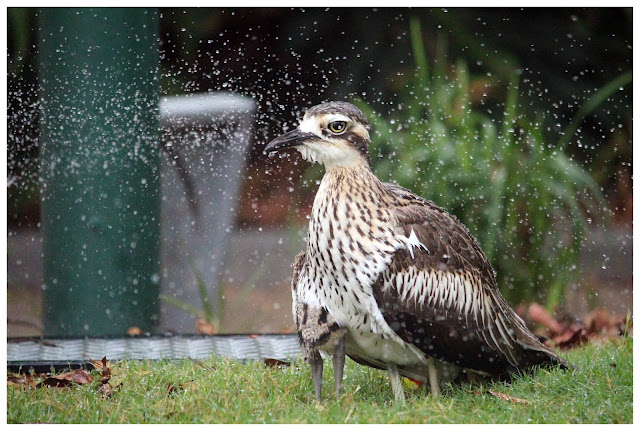 One of the greatest joys of summer used to be cooling down under the sprinkler. It was such a simple pleasure with all the kids running about like crazed creatures, their laughter echoing through the streets.
On really hot days, the parents would join in and that was extra special.
In recent years, this was an activity that seemed destined to go the way of the dinosaur. While many things we enjoyed as kids (such as the see-saw) have fallen victim to the "fun police", it was drought and water restrictions that looked like they would spell the end of back yard sprinkler splashing.
But the dams are again full, the restrictions have gone and no longer is turning on a tap a neighbourhood crime right up their with barking dogs and fence disputes.
At South Bank this morning the sprinklers were on and a bush stone curlew was taking full advantage its chick sheltering under her wing.
They stayed for ages and then finally bored Mum wandered off the chick following behind letting the world know that he or she was not happy the fun was over.
And speaking of fun being over, today marks the 25th anniversary of the closing of Expo 88 in Brisbane. When the Expo packed up and moved on, the site left behind was redeveloped into South Bank where this photo was taken this morning.
That carnival may be over but South Bank remains as one of Brisbane's best draw cards for both human and feathered visitors.

Posted by Susan Hetherington at 9:09 AM