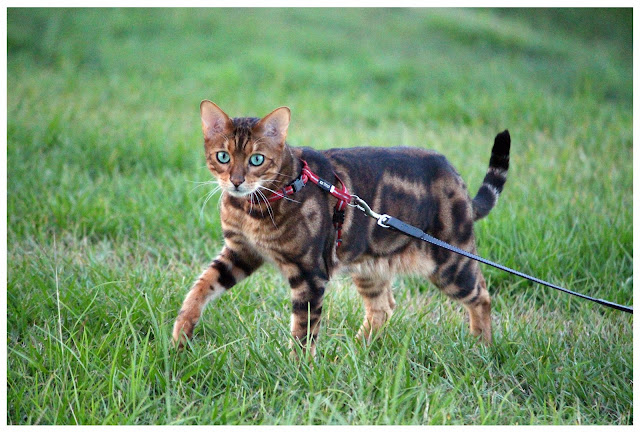 Much of today was a blur, mainly because I couldn't find my glasses. Again. Still.
I blame my family and their boy looks. I mean, I couldn't be expected to find my glasses without my glasses now could I?
The most annoying thing was that they were exactly where I thought they would and should be - by the bed where I had taken them off last night. They had lodged themselves between the bedside table and the bed and, apparently wrapped themselves in a Harry Potter style cloak of invisibility.
Finally, eight hours of near blindness later they were found when there was just enough light  to take the fur creature for an afternoon walk.
Even though I was again seeing clearly I found it hard to believe my eyes. There in Highgate Hill park was Tanzin the Bengal cat being taken for a walk on a lead by owners James and Mary.
I don't think I've ever seen a cat going off for a walk before. Then again, few people have ever seen our interpretation of dog walk before where the dog is often being carried on my shoulders. The look in Tanzin's eyes would suggest he was as surprised and amused by the sight as I was. Perhaps you need your eyes checked pussycat.

Posted by Susan Hetherington at 9:04 PM