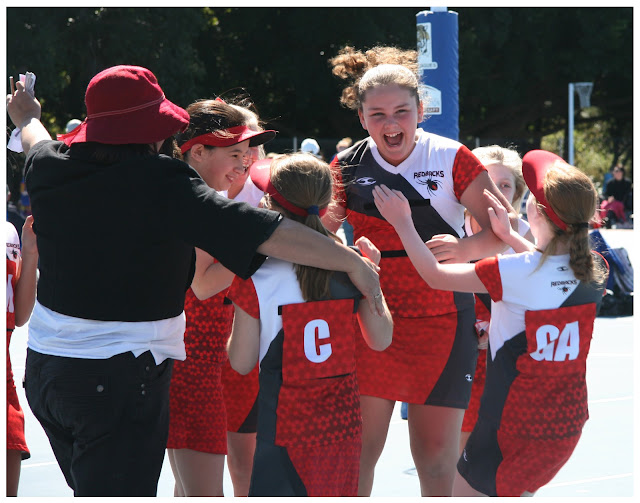 They say it doesn't matter if you win or lose, it's how you play the game.
They also say that second place is just the first place loser
Or that winning isn't everything but it beats anything in second place.
Or even "There is no such thing as second place. Either you're first or you're nothing."
It seems to me that in the past two weeks we have been sending very bad messages to our future sports people.
At school there is such a big emphasis on taking part.We tell kids participation is important and if at first you don't succeed try, try again.
But kids are not blind nor are they stupid. They see the national gnashing of teeth and the sometimes quite vile name calling when our elite sports people don't win. It's all quite unbecoming.
But I'm pleased to see that at a local level kids can still enjoy getting out and having a go.
I went to my niece Cleo's Under 11 netball preliminary final this morning. The Redbacks played beautifully and as you can see from the photo above winners are grinners.
But in the true spirit of the game, the girls all lines up and shook hands and congratulated their opponents and thanked the officials. Three cheers for that.

Posted by Susan Hetherington at 2:21 PM