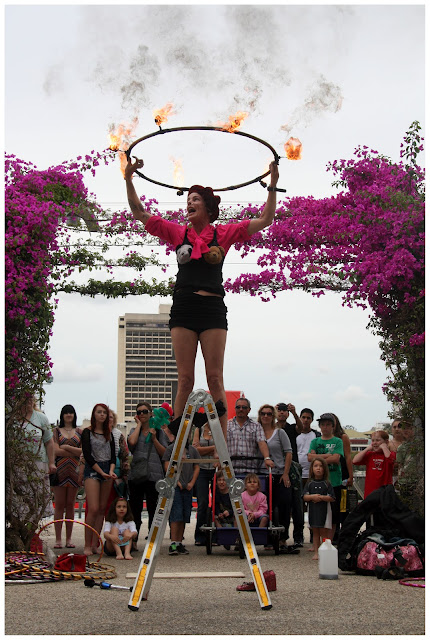 If you can't stand the heat...don't set fire to a hula hoop and then start wiggling it around your hips.
One of my favourite things to do on a weekend is to stroll down to South Bank and watch as the street entertainers lure the crowds of families from the beach, playground equipment and picnic areas to watch the performances.
Today it was Judith Lanigan the amazing international hula hoop performer.
One can only imagine how circus performers such as Judith dream up their routines. What sort of thought bubble would require envisaging climbing up a ladder and performing a flaming hula hoop act?
Of course being able to perform these feats is only a small part of the trick. The performance prattle is vital to the entertainment experience. Judith had the crowd eating out of her hand as she told us that she would perform bare breasted. Turned out it was bear breasted. Just as well given there was fire involved. All I can say is that it is just as well she is self employed because she would never get this act past a workplace occupational health and safety officer. Everyone knows it's not safe to climb that high on a ladder.
Judith, I think you were smokin'. Not so hot were those who were prepared to watch the whole act and then sneak away without dropping even a small coin into the hat. If it has no value to you don't watch.
Posted by Susan Hetherington at 3:29 PM