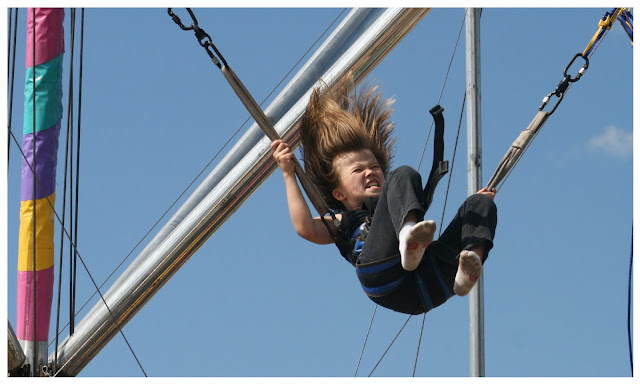 An accomplished pianist friend once told me how frustrated she would get when people commented on how "lucky" she was to have been given such a "talent" for music.
Yes music was a gift, she said, but rarely did people seem to acknowledge just how much hard work, practice and determination had to go in to make the music look like it came naturally.
As with so many things in life you get out of it what you are prepared to put in. Hard work may not always be its own reward but big rewards often come from hard work.
Just look at nine-year-old Tamika who was showing off her incredible skill on the Bungee Trampoline at the Beenleigh Show today. This kid is a natural. Never have I seen as many backflips in a row except perhaps during my time as a political reporter.
But check out that look on her face. That's pure grit and determination. She may be just letting her hair down at an agricultural fair but she's giving it all she's got.
My son is desperate to get a T Shirt that reads "Hard work never killed anyone but I don't want to risk it". Something tells me that's not Tamika's style. This one is bending over backwards to get it right.
Posted by Susan Hetherington at 4:08 PM