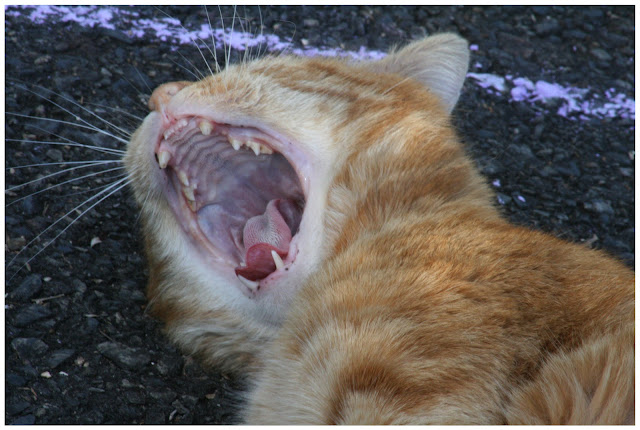 People often tell me that I am showing my age when I confess to loving nothing more than an afternoon nap. To them, it's a Nanna Nap reserved for women of a certain age.
Well then, that means I was a child prodigy. For as long as I can remember the nap has been one of my favourite things to do. Snoozen is not just my name on Twitter. Snoozen has been my nickname since my late primary school years.
This cat and I have a fair bit in common. Just after 3pm today, about the most perfect time for the nap, kitty was having a little shut eye in the sun just outside my house.
When I walked by it half opened an eye, yawned loudly and then went straight back to sleep. Clearly nothing was going to get in the way of the nap.
The subject of the afternoon nap sprung to mind today because tonight Mr O and I are off to Sing-a-long Sound of Music where everyone is encouraged to dress up as something inspired by the film.
We tossed around ideas for costumes many of which were based on the song My Favourite Things.
I considered and ultimately rejected going as a brown paper package tied up with string, whiskers on kittens or a snowdrop (that falls on my nose and eyelashes).
Eventually Mr O and his friends settled on girls and white dresses with blue satin sashes while I have a fetching Maria dress.
But as we threw around ideas I considered what would be a few of my favourite things. So with apologies to Rodgers and Hammerstein:
Sleep-ins on Sundays and afternoon napping
Great Turkish banquets with all the trappings
Theatre productions where everyone sings
These are a few of my favourite things
When the bills bite
When the fees sting

When I'm feeling sad
I simply remember my favourite things
And then I don't feel so bad
Posted by Susan Hetherington at 4:31 PM