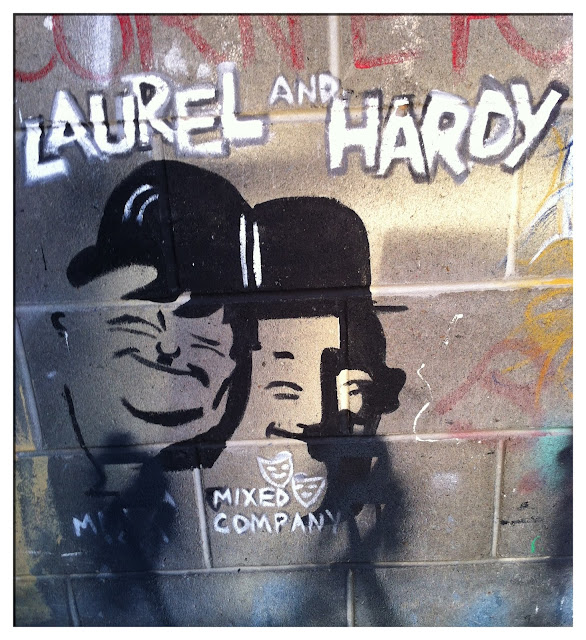 Ask my son and he will tell you that he was born to be in musical theatre because he was named after a musical.
This isn't actually true. Oliver is just a name that both my husband and I liked and the fact that there happened to be a musical of the same name never crossed our minds.
Undeterred by the facts of history, Mr O is doing his best to be a role model Oliver. Like the musical "never before has a boy wanted more". But that's another story.
Anyway, he is always Oliver (or at homework time Oliver!with the exclamation mark, just like the musical) but never Ollie.
Believe it or not it never occurred to me that people would shorten it to Ollie but I hear it all the time from teachers and I think it sounds rather cute (not cute enough to make me want to use it, but cute just the same).
Of course I should have know that an Oliver would get Ollie just like Oliver Hardy who was always Ollie.
All of which leads me to today's picture taken from the wall of the Cement Box Theatre at St Lucia.
The block wall has been adorned with images of actors and productions and centre is this rather impressive Laurel and Hardy. It's perfect in the situation and given the chaotic nature of the images around it I don't think it would be out of place for Ollie to utter his signature line "that's another fine mess you've gotten me into". And that, too, reminds me of my Oliver.
Posted by Susan Hetherington at 2:32 PM