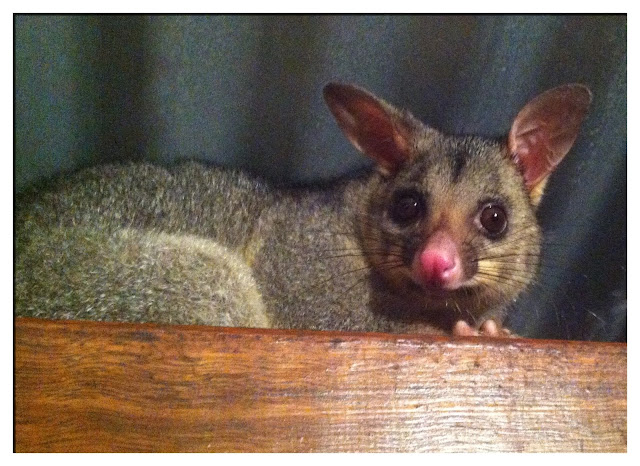 Live in this part of the world and you get used to it. There's a large thud on the roof followed by scurrying overhead. At times I feel like we live on Possum Parade, a well worn path between the street and the gully behind. Borrowing from Australian children's author Mem Fox, there's a little bit of magic about possums. Of course, it is a completely different story if the possum is in the roof cavity and running across the ceiling not the iron. I clearly remember the battle we had to get one out of the roof when I was growing up and then to find and seal the hole where it had entered.
A possum in the ceiling equals very disrupted sleep. I can still picture my Dad and neighbour John,  hessian sack, noose and torch in hand climbing through the man hole for the great possum removal mission. Eventually the neighbours prevailed. Eventually.
Thankfully we don't have possums in the ceiling but on very wet nights like last night, the possums do favour a little spot sheltered on a beam on the corner of the deck. This little fellow arrived just after 9pm and made himself at home. This photo was taken just after midnight just so it could be "today's" photo

Posted by Susan Hetherington at 6:21 AM