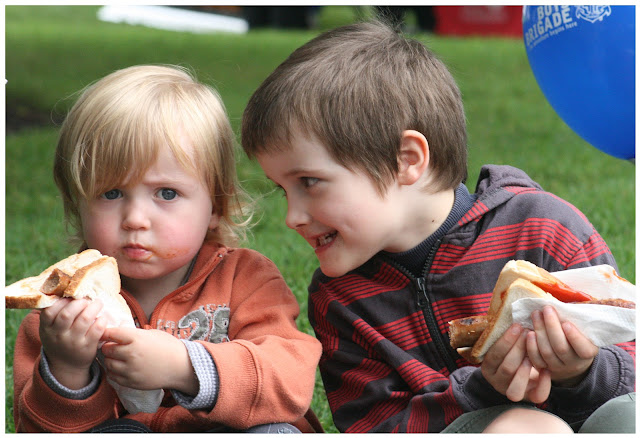 To celebrate the Queen's diamond jubilee, the gates to Government House Queensland were thrown open and Her Majesty's subjects in Brisbane were invited in for an Open Day and Community Fair.
Given all the pomp and ceremony in London this weekend it was a much more laid back Brisbane affair with school bands and choirs, house and garden tours and a tree planting.
I love this photo of brothers Ollie and Leuca who were sitting on the rather soggy lawn enjoying lunch with Dad Jeremy. I mean, really, nothing says an Aussie celebration better than a sausage sizzle especially one with a Royal seal of approval. Forget a cucumber sandwich, I bet a snag and a bit of tomato sauce is what the Queen would really like to chow down on.
I watched the Governor Penelope Wensley walk among the crowd and couldn't help but be impressed by her down-to-earth attitude. I am sure I am breaking about 300 different protocols and am now liable to be charged with treason but I can report that she told the volunteers that:
1) her hair gets unbelievably frizzy and uncontrollable in the rain
and
2) she had to abandon a plan to wear a fetching pair of shoes that matched her frock because they would have been trashed in the mud
She strikes me as a perfect person to represent the Queen in Queensland. There's only one problem. I simply fail to comprehend why a big grown up country like Australia thinks we need a head of state in another country.
So if I didn't commit treason before, I guess I just did then.
Sixty years on the throne is a remarkable achievement and one that should be celebrated. Now can we all just move on.

Posted by Susan Hetherington at 3:47 PM