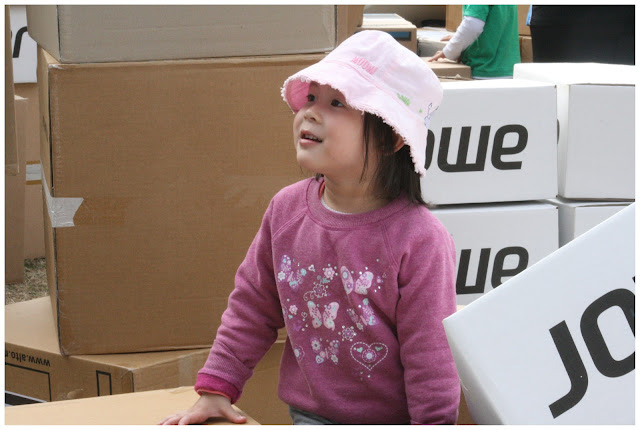 What parent hasn't invested a great deal of time, effort and most likely money on finding that perfect gift for a child only to find that the real interest is in the packaging and not what's inside?
New white goods will barely raise an eyebrow but the box? Why, there are hours of fun right there.
Yep, for fun you don't have to think outside the box you just have to think about the box.
This is what makes We Built This City such genius. Polygot Theatre has gathered together literally thousands of boxes and invited children in to play.
They get to construct buildings and tunnels, towers and cubbies and then they get to knock them down and start again. Really what could be more fun?
We Built This City is yet another completely awesome part of the Out of The Box Festival for Children.
It does cost ($15 per person) and for that you get not only between 40 and 50 minutes with the boxes but roving performers guiding the action as well. Not that many of the kids needed much encouragement. Their biggest problem was convincing Mum or Dad that they really didn't need "help". Why should the kids have all the fun? You are never too old to find fun in a box. Pictured here is four-year-old Mikaela who was enjoying the festival today with Mum and Grandma.

Review: Me and My Shadow

What child hasn’t had fun playing with his or her shadow? But what if the shadow doesn’t behave? What if the moment you turn your back it isn’t doing exactly what you do but it’s being very naughty indeed? It’s mucking up? It’s moving and grooving? And not only that, your female shadow seems to have turned male. Such is the premise of Me and My Shadow the Patch Theatre Company’s performance at the Playhouse QPAC as part of the Out of the Box Festival.
This is a show of not so much smoke and mirrors but light and shade and in particular shadow. The audience at today’s performance was going off showing why this production won the 2011 Helpmann Award for Best Presentation for Children. In the end it’s an unlikely love story but one told with few words and a lot of silliness all set to an intriguing score. The kids loved it. Recommended for children aged 4-8.
Verdict 4/5 stars
Me and My Shadow is playing at the Playhouse QPAC until Sunday. Tickets are $25 for adults and $20 for children.

Review: The Race For the Chinese Zodiac

Thirteen animals. Twelve places in the Chinese Zodiac. The Race for the Chinese Zodiac is a traditional Chinese Fable which this week is being played out  on the stage of the Concert Hall, QPAC, as part of the Out of the Box Festival.
Based on the children’s book by Gabrielle Wang this production is not so much a play as a story told to traditional music with a screen above the stage showing pages from the book. In some ways it is really not much more than a story telling like what you might see at a library or children’s bookshop BUT the traditional Chinese score performed live by the Australian Chinese Music Ensemble is haunting and beautiful and raises it to a whole new level. Not only that, the narrator/come performer completely captivates the children. As well as hearing the story, the children learn about the traditional Chinese instruments and learn  a little bit about the animal that represents them in the Chinese Zodiac. In the best children’s entertainment style are invited to perform as that animal. The kids loved it.

Race for the Chinese Zodiac is playing at the Concert Hall, QPAC until Friday. Tickets are adults $25 and children $20. Recommended for children aged 5-8.
Rating 3.5 stars out of  a possible 5
Posted by Susan Hetherington at 5:29 PM

Email ThisBlogThis!Share to TwitterShare to FacebookShare to Pinterest
Labels: #Me and My Shadow #The Race for the Chinese Zodiac, #project365 project366 #Out of the Box #We Built This City